Why don’t mammals cross the road? 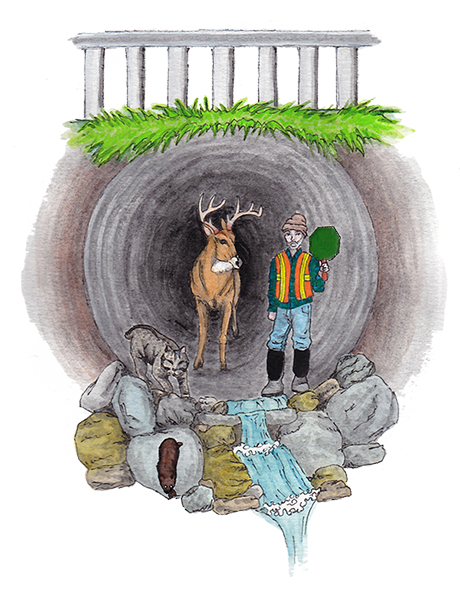 It turns out we all have something in common with wild animals: most don’t like having wet feet any more than we do.

For the past decade The Nature Conservancy has been conducting wildlife studies looking at where and when wild animals will use bridges or culverts to cross roads by spying on them with game cameras. That most animals prefer a dry route is just one among many conclusions their on-going project has yielded so far.

Paul Marangelo, Senior Conservation Ecologist with The Nature Conservancy’s Vermont chapter, heads up the wildlife game camera project. I joined him on a foggy March morning to check the game cams. We met up in Montpelier and headed south on 89 to do a big circuit of southern Vermont. Four of the sites we planned to check were along route 9, a typical Vermont road: two lanes of pavement in rough repair winding through the bare, early spring woods.

Roads are potential barriers to animal movement across the Vermont landscape, breaking up habitat and limiting their ability to move. Habitat fragmentation like this is a conservation concern that is only growing as conservationists look to the future and wonder how wildlife will adjust to climate change.

As weather and seasonal patterns become unpredictable with climate change, wild animal populations will be most resilient if they can move flexibly through the landscape, a flexibility that roads physically hamper. The extent that a road acts as a barrier depends on many factors, including the type of structures on the road that will allow animals to pass without braving the oncoming cars, i.e. bridges and culverts. The Nature Conservancy wants to know: are existing road structures welcoming to wildlife?

The first site Paul and I stop at is a large culvert allowing a mid-sized brook to pass under the road. There’s a game cam on each end, stationed inside the culvert and looking out. The banks down are steep and still covered in two feet of snow, with the brook running high enough that there are no rocks to stand on. Paul puts on waders to collect data cards and change out the batteries.

Conservationists with The Nature Conservancy suspected that the current structures, like this route 9 culvert, were not wild animal friendly. Their goal with the wildlife game camera project was to identify qualities about existing bridges and culverts that do or do not make them animal friendly, with the ultimate purpose of creating guidelines for VTrans to use for planning better bridges and culverts.

Paul put up game cams on bridges and culverts in key habitat connectivity corridors where he suspected animals would be moving. He has certain species of interest for this study: coyote, deer, moose, black bears, bobcats, fishers, grey and red foxes, otters, skunks, and weasels. They’re all big mammals partly because it’s easier to identify large animals on grainy game cam images. Every season he makes the trek around the state to collect the game cam footage and replace the batteries.

Once we finish all our stops along route 9, we swing back north on route 7. In the back seat, I start reviewing the game cam images from a camera placed underneath a large bridge. Will we find a lucky money shot this time, like the picture of a bear standing upright that Paul likes to use in reports? Nope, the wildlife caught in action on this camera include a lot of squirrels, muskrats, and fishermen, but no species of interest.

Paul’s game cam spying has revealed different patterns of behavior for each mammal. Many of the species of interest do not like crossing under bridges or culverts and will only rarely use these structures: moose and bear were rarely caught on camera using a structure to cross under the road; they prefer to take their chances with the traffic. Deer, on the other hand, are comfortable crossing under bridges and were frequently caught on camera. Most of the species of interest strongly preferred dry sites, except for deer and otters, who are ok with getting their feet wet. True to their cat nature, bobcats would carefully walk along narrow abutment shelves. The larger animals of interest should be able to use larger bridges, but bridges often have “rip-rap”, the jumble of rock fill that surrounds the bases of many bridges, which they find difficult to walk across.

From all these data Paul has confirmed that current road structures are typically not welcoming to wildlife. For many of the species of interest the existing structures are simply too small: they are reluctant to enter such confined spaces. In many cases, the bridge or culvert in question is also too small for the stream, so upgrading would serve the double purpose of helping mammals cross the road and preventing wash outs.

VTrans is happy to take wildlife needs into account during building, especially in places where helping wildlife safely cross roads is important. A larger structure can serve both wildlife and transportation needs without extra cost. They can also use rip-rap around bridges in ways that leave a walkable surface for large mammals. Paul is confident that the wildlife game camera studies will eventually provide VTrans with a clear assessment tool for road structures and guidelines for how to replace them with animal-friendly options.

Driving home from Montpelier through the gray spring evening, I found myself looking at every bridge and overpass and culvert, wondering how local wildlife interacted with the structures in my own stomping grounds. Were the bridges big enough? Were the culverts too wet? As climate change reshapes my home, will the animals I live with, whether I see them often or not, be able to move and adapt across the changing landscape?